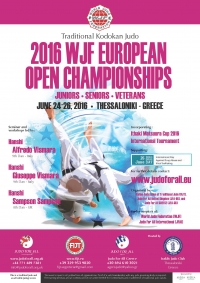 This event is organised by the WJF EU Technical Committee supported by the Federation JFAGR, Judo For All UK (JFAUK) and Federazione Italiana di Judo Tradizionale (FIJT - Italian Federation of Traditional Judo).

The 2016 WJF European Judo Championships is the third such event led by the WJF EU Technical Committee following the successful events in 2013 and 2015 held in Milan and Jesi in Italy respectively. It is sanctioned by the World Judo Federation (WJF) that has enshrined the very concepts of Traditional Kodokan judo and “Judo For All” in its founding documents. The event is also part of the ongoing campaign of the “Judo For All International” that was launched in 2012 in Jesi, Ancona in Italy, on the occasion of the 130th anniversary of the founding of the Kodokan, in Japan.

The seminars, courses, and the contests planned by the organizing committee will be conducted under the guidance and recommendations of the European Technical Committee of the World Judo Federation and in adherence to the concepts of Traditional Kodokan Judo.

The organizing committee invites all members of WJF and other judo formations supportive of the principals laid down by Professor Jigoro Kano to join us in Thessaloniki, Greece in June 2016 and to participate in our common initiative to revive and reinvigorate judo and the best that it can offer to all. We use this opportunity to express our support for the international campaign opposing doping and drug abuse.

The competition rules are those rules and regulations that were proposed and officially ratified by the WJF European Technical Committee (at its meeting in Jesi, Ancona in October 2012). It can be downloaded from the websites of www.judoforall.eu .

All registrations: to the Shiai, the Seminar and the Dinner on Saturday evening, must reach the secretariat by e-mail:

Further details of the program, registration and contact forms will be made available on application and also through the website www.judoforall.eu

We look forward to seeing you!