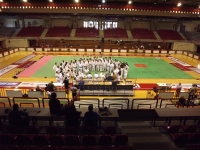 European representatives of the World Judo Federation gathered in Jesi, Ancona, Italy on the weekend of 27/28th October to breathe new life into the old traditions of Kodokan Judo. In what is a major attempt to reclaim the original values of Judo, nineteen senior dan grades from Italy and the UK, led by 9th Dan Alfredo Vismara and 6th Dan Sampson Sampson, hammered out a set of contest rules that they hope will eliminate the ego and money driven aspects of the martial art that has seen Olympic Judo reduced to what they see as little more than wrestling in white suits.

The world of judo has never been at peace since it was introduced to the Olympics in 1964 after which the activity has been dominated in all countries by Olympic governing bodies whose driving force is the international contest circuit, consisting of a small number of elite, professional performers. WJF aims to create a movement that is based on the concept of judo for all, taking an holistic and traditional approach to training and contest.

The new rules have been in gestation since the Italian organisation Federation of Italian Traditional Judo (FITJ www.fijt.it) and Britain’s Judo For All (JFAUK www.judoforall.org.uk)established links earlier this year. Following a highly successful meeting on Saturday 27th, fighters from both organisations took part in a contest the following day, with around 100 contestants competing under the new rules. The event was also attended by Bruce Bethers, the General Secretary of WJF and Paul Hoglund, the European President of WJF.

As part of WJF’s aim of returning to the principles of Judo as laid by the founder Dr Jigoro Kano, the new rules explicitly bans techniques that require a contestant to drop onto both knees. Other prohibited acts are stiff arming and dragging or pulling an opponent down, acts that are based on negative use of strength. Whilst such rule changes are aimed at improving the quality of judo, other changes are geared towards instilling a greater awareness of the philosophies and principles of judo: referees will wear traditional judogi, rather than blazers and each contest is refereed by just one referee and no corner judges, although matches will also have a second referee off the mat who will confer with the man or woman in the middle if required.

Organisers of the events see the weekend’s competition as ground breaking but certainly not as a one off event. JFA UK will later in the year be holding a advanced Sutemi Waza course in Edinburgh and as the organisation grows the calendar of events is also growing, with events taking places across the UK as well as a continued strategic growth in Europe generally.