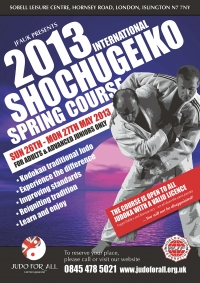 JFAUK successfully held its Second Traditional Shochugeiko International, on 26-27 May 2013. The two day event was preceded by JFAUK special refereeing course on Saturday 25 May,2013. The Shochugeiko 2013, was hosted by Sobell Judo club in the main sports hall of Sobell Leisure Centre, in Islington, North London.

The course was held on two consecutive days, from 10am until 4:30pm. Both days were packed with intense judo training without any stopping time apart from a quick lunch break –testing the stamina and concentration levels of everyone involved.

The course was led by the JFAUK Technical Director, Sampson Sampson who has led the organisation from its founding, to progressively deepen its understanding and commitment to traditional Kodokan judo. The Shochugeiko annual summer training camp is an important element of the JFAUK strategy for unfolding judo for all.

Sensei Sampson, has steered the organisation and led its members to practice judo upholding the traditional values and methods avoiding the traps and distractions that dilute and transform judo from a potent educational method into its opposite or a trimmed down version.

This sharp distinction was amply demonstrated during the two day training sessions helping to once again prove that for judo to be effective one must engage in targeted and purposeful training, comprehend the interaction of each technique with one another and understand the various exercises as integral elements that help build up skills and provide insights of the essence of Judo. Although, at first sight some of the exercises and warm up techniques may seem unrelated, they were shown to be essential exercises that help execute more complex techniques. The course demonstrated and put to practice the concept of maximum efficiency in learning and practice, that traditional Kodokan judo was built upon by its founder. It clearly showed that when taught purposefully judo can deliver more effective results than any special training of the elite for the competitions.

This is a difficult path to follow. But all those participating in the Shochugeiko felt that they found opportunity to push themselves beyond their own limits and that they surprised themselves and excelled. They were exposed to new techniques, revisited others in new light and explored possible variations that provided food for thought and further tasks to practice during normal sessions.

All the training sessions and master classes that the JFAUK holds, help portray the essence and raise the essential teachings of judo. The central point that was being raised throughout was that to fulfil a technique one must understand its processes and its stage by stage dynamics. Once grasped anything is possible. Without this understanding the process seizes to be judo, (the gentle way) and will continue to remain an inefficient physical act or an abstract tiresome exercise that demand excess power to fulfil. That nothing just happens; that each action must be a conscious effort. Those who managed to grasp this took much away with them. Those who did not fully grasp this will have more opportunities in future, and will just keep trying harder.

Many positive comments were made by participating judoka and spectators, including that the Shochugeiko upheld a feeling of tradition and formality that is rarely felt anywhere; that the Shochugeiko is run in a very constructive manner that it has a clear purpose and meaning that reaches out to all judoka from the beginners to the sensei.

As a fantastic and well received training course, the Shochugeiko was concluded with all participants expressing enthusiasm in the upcoming events and activities such as the borders summer camps and looking forward to others JFAUK courses and events.

All participants were invited to take note of the scheduled seminar in Italy led by grand masters A. Vismara (9 Dan), G. Vismara (9 Dan) and S. Sampson (6 Dan) planned for 2 November 2013 and the First WJF open European championships, that will be held on the next day on 3 November 2013, in Italy. This is an important event that JFAUK is co-organising with our closest partners Federation of Traditional Judo of Italy (FIJT) on behalf of World Judo Federation (WJF).